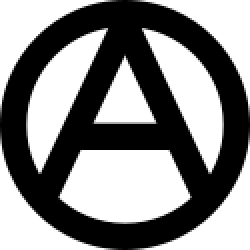 Anarchy has more than one definition. Some use the term "anarchy" to refer to a society without a publicly enforced government or violently enforced political authority. When used in this sense, anarchy mayor may not be intended to imply political disorder or lawlessness within a society.

Others, including most individuals who self-identify as anarchists, use the term to imply a system of governance, mostly theoretical at a nation state level. There are also other forms of anarchy that attempt to avoid the use of coercion, violence, force and authority, while still producing a productive and desirable society. Anarchy is also a technical issue of economic science.

The Circle-A is almost certainly the best-known present-day symbol for anarchy. It is a monogram that consists of the capital letter "A" surrounded by the capital letter "O". The letter "A" is derived from the first letter of "anarchy" or "anarchism" in most European languages and is the same in both Latin and Cyrillic scripts. The "O" stands for order. Together they stand for "Anarchy is the mother of Order," the first part of a Proudhon quotation.[8] This character can be written as Unicode codepoint U+24B6: