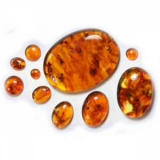 When describing amber, using the word “gemstone” can be awkward, since amber is not technically a stone at all. Nonetheless, it has been used as ornamentation for thousands of years and has acquired a number of symbolic meanings.

Amber is composed of fossilized resin, a sticky substance found in numerous types of trees and plants. As the resin hardens, everything from air bubbles to insects can become trapped inside, which gives decorative amber part of its aesthetic appeal. The rich honey-colored variety of the material is also known as Baltic amber, since it is most commonly found in areas around the Baltic Sea in northern Europe. While other colors of amber exist, such as the famous Dominican blue amber, it is the golden variety that carries the most symbolic significance.

Due to its color, amber has long associated with the sun; it was once believed that amber was composed of sunlight that had solidified into hard material, and the translucence of amber further supported this belief. The ancient Greek sun god Apollo was associated with amber. Another amber-related figure in Greek mythology was Phaeton, the ill-fated charioteer who tried to drive the sun across the sky. When he failed and crashed to the earth, amber was said to have formed from the tears that were shed over his death.

The concept of amber forming from tears is also present in Norse mythology. Freya, the goddess of love, was said to have wept bitterly while searching for her missing husband. When the tears she had wept fell to Earth, those that hit the land turned to gold, but those that fell into the sea became amber. Since the Norsemen and their neighbors certainly knew amber was found around the Baltic Sea- it was a popular trade item- it’s easy to see how the connection between the landscape and the myth could have been made.