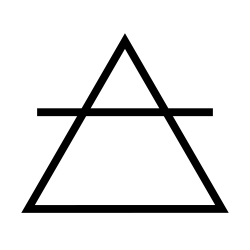 Air is one of the four classical elements in ancient Greek philosophy and science. According to Plato, it is associated with the octahedron; air is considered to be both hot and wet. The ancient Greeks used two words for air: aer meant the dim lower atmosphere, and aether meant the bright upper atmosphere above the clouds. Plato, for instance writes that "So it is with air: there is the brightest variety which we call aether, the muddiest which we call mist and darkness, and other kinds for which we have no name...." Among the early Greek Pre-Socratic philosophers, Anaximenes (mid-6th century BCE) named air as the arche. A similar belief was attributed by some ancient sources to Diogenes Apolloniates (late 5th century BCE), who also linked air with intelligence and soul (psyche), but other sources claim that his arche was a substance between air and fire. Aristophanes parodied such teachings in his play The Clouds by putting a prayer to air in the mouth of Socrates.

Air was one of many archai proposed by the Pre-socratics, most of whom tried to reduce all things to a single substance. However, Empedocles of Acragas (c. 495-c. 435 BCE) selected four archai for his four roots: Air, fire, water, and earth. Ancient and modern opinions differ as to whether he identified air by the divine name Hera, Aidoneus or even Zeus. Empedocles’ roots became the four classical elements of Greek philosophy. Plato (427-347 BCE) took over the four elements of Empedocles. In the Timaeus, his major cosmological dialogue, the Platonic solid associated with air is the octahedron which is formed from eight equilateral triangles. This places air between fire and water which Plato regarded as appropriate because it is intermediate in its mobility, sharpness, and ability to penetrate. He also said of air that its minuscule components are so smooth that one can barely feel them.

Plato's student Aristotle (384-322 BCE) developed a different explanation for the elements based on pairs of qualities. The four elements were arranged concentrically around the center of the universe to form the sublunary sphere. According to Aristotle, air is both hot and wet and occupies a place between fire and water among the elemental spheres. Aristotle definitively separated air from aether. For him, aether was an unchanging, almost divine substance that was found only in the heavens, where it formed celestial spheres.