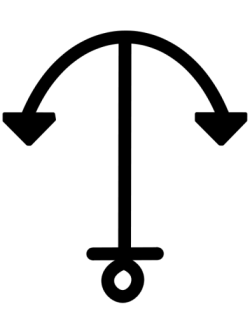 5 Astraea is a large main-belt asteroid. Its surface is highly reflective (bright) and its composition is probably a mixture of nickel-iron with magnesium- and iron-silicates.

Astraea was the fifth asteroid discovered, on December 8, 1845, by K. L. Hencke and named for Astræa, a goddess of justice named after the stars. It was his first of two asteroid discoveries. The second was 6 Hebe. An amateur astronomer and post office employee, Hencke was looking for 4 Vesta when he stumbled on Astraea. The King of Prussia awarded him an annual pension of 1,200 marks for the discovery.

Photometry indicates pro-grade rotation, that the north pole points in the direction of right ascension 9 h 52 min, declination 73° with a 5° uncertainty. This gives an axial tilt of about 33°.