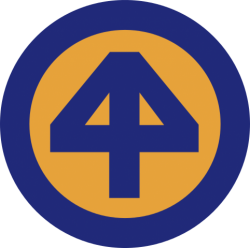 The 44th Infantry Division was a division of the United States Army National Guard from October 1920 to November 1945, when it was inactivated after Federal Service during World War II. A second 44th Infantry Division existed in the Illinois Army National Guard from 1946 until October 1954, when that division was disbanded after federal service during the Korean War.

The shoulder sleeve insignia (unit patch) of the 44th Division was approved by the Secretary of War on 5 October 1921. The division was formally organized and federally recognized on 26 March 1924.