This page lists of the various symbols in the National Basketball Association Logos group.

Symbols in this group:

The Boston Celtics logo since the early 1960s features a leprechaun spinning a basketball, named Lucky. It was originally designed by Zang Auerbach, the brother of Celtics head coach Red Auerbach. For a long time, the logo's only colors were black, white and green. Then for the 1996–97 season, celebrating the club's 50th anniversary, the logo got a full-color treatment. Lucky's face and hands were both painted tan, while gold was included on the vest, bow tie and hat, as well as brown on the ball and shillelagh, and black on its pants and shoes.

NETS in white arched over a white basketball with a black B on it, all within a black shield with BROOKLYN below in black

When the Hornets were first introduced, the logo was of a teal and purple scowl-faced anthropomorphic hornet wearing white shoes and gloves dribbling an orange basketball. The words 'Charlotte Hornets' were in teal and curved across the top and bottom of the logo. An alternate logo, used only for the 1988–89 season, featured a large teal letter 'C', with 'Charlotte' in black letters curved upwards underneath. Inside the 'C' was a smaller white letter 'H' outlined in teal, with a black colored hornet holding a basketball from birds-eye view placed in the center. The 'H' portion of the logo remained on the warm-ups and wasteband of the jerseys until the 1991–92 season.

When the Cleveland Cavaliers debuted in the NBA in 1970, the team's original jerseys were wine and gold. The first jerseys featured the feathered treatment of the letter C in Cavaliers. In 1974, they changed into the classic block lettering and checkerboard pattern that was synonymous to the 'Miracle of Richfield' teams of 1976. In 1980, the gold shade was changed from yellowish to metallic, and the uniforms removed the checkerboard pattern and placed the stripes above Cleveland and below the uniform number, the only time the city name was featured in both home and away jerseys.

The 2001–02 season was a great season for the Mavericks, with a 57–25 record and many sellout crowds in the American Airlines Center. This season also saw a change in logo and colors, changing from the cowboy hat logo and green to a new horse logo. In addition, the team gained sleeker uniforms. Another blockbuster trade sent Juwan Howard, Tim Hardaway and Donnell Harvey to the Denver Nuggets in exchange for Raef LaFrentz, Nick Van Exel, Tariq Abdul-Wahad and Avery Johnson, the Mavericks also made several attempts to sign the Utah Jazz's star Karl Malone. The Mavericks swept the Kevin Garnett-led Minnesota Timberwolves in the playoffs but lost again in the second round, this time to the Chris Webber-led Sacramento Kings.

A blue snowcapped mountain peak over Nuggets script in yellow.

'Detroit Pistons' in white with blue outline on a red ball.

The Golden State Warriors are an American professional basketball team based in Oakland, California.

When the Rockets debuted in San Diego, their colors were green and gold. Road uniforms featured the city name, while the home uniforms feature the team name, both in a serifed block lettering. This was the only uniform design the Rockets would use throughout their years in San Diego. The Rockets' first logo featured a rocket streaking with a basketball surrounded by the team name.

Upon moving to Houston in 1971, the Rockets replaced green with red.

They kept the same design from their San Diego days, save for the change of color and city name. The logo used is of a player with a spinning basketball launching upward, with boosters on his back, leaving a trail of red and gold flames and the words "Houston Rockets" below it.

For the 1972–73 season, the Rockets introduced the famous "mustard and ketchup" logo, so dubbed by fans, featuring a gold basketball surrounded by two red trails, with "Houston" atop the first red trail and "Rockets" (all capitalized save for the lowercase 'E' and

A blue P outlined in silver with a yellow basketball with script.

"CLIPPERS" in black with a silver lining in between two arched horizontal red and blue lines on either side. A basketball with an "LAC" is above.

The Laker nickname came from the state of Minnesota being the Land of 10,000 Lakes.

The team's colors are purple, gold and white.

Red basketball with flames goes through a white hoop.

In their inaugural season in 1989, the Timberwolves (or "Wolves" as it said on their jerseys) debuted blue road uniforms with green lettering and numbers with white. Their home uniforms featured blue lettering and numbers with green outlining. The creation of both uniforms was led by head designer, Brian Mulligan. There was going to be a green alternate jersey with blue lettering to go with the uniforms, but the idea was dropped. It would've followed a similar move the Dallas Mavericks took when they switched back to blue in the early 1990s, opting the Wolves a chance to use green for a jersey color instead.

After drafting Kevin Garnett, the Timberwolves design team, under guidance from Brian Mulligan, changed their uniforms yet again in 1996.

After purchasing the team, Benson indicated that he wanted to change the club's nickname to something more regionally appropriate. On December 14, 2012, it was reported that the Hornets would change their nickname to the New Orleans Pelicans.

On January 24, 2013, the team held a press conference, where it unveiled its new nickname, logos and colors. The name Pelicans is a reference to the brown pelican, the state bird of Louisiana. The team said in a press release that its colors would be navy, gold and red; each color is represented in the city flag of New Orleans.

The team formally adopted its new brand identity at the end of the 2012–13 NBA season.

Knicks in orange and blue above orange basketball on grey triangle 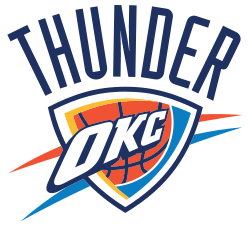 The Oklahoma City Thunder unveiled their first logo on September 3, 2008. According to majority owner Clay Bennett, the team's logo takes several of its elements from other Oklahoma sports teams, such as the University of Oklahoma Sooners and Oklahoma State University Cowboys.

The uniform design was unveiled on September 29, 2008.

Magic in blue arched beneath Orlando in black above a basketball.

76ers in blue and red on a modernized basketball, 13 blue stars above the 7. Inside a blue roundel with PHILADELPHIA arched above and 6 stars below.

During the sixties and the seventies took place, in the city of Phoenix, the birth of the local basketball franchise, the Phoenix Suns, and the local designers used purple and orange as the main colors for the uniforms. The decoration of the uniforms (numbers, names and logos on both side of the jerseys) were accent with orange while the purple was used as a color so as to enphasize the stripes and the decorations of it, which lent a crisp, dark accent color to complement the orange just inside. Since their debut, the Suns home uniforms have been always white coloured with purple and orange trim. When playing abroad, their uniforms are normally purple with white and orange trim, with accents of black during the 1990s and gray on the current versions. They also had a black alternate uniform from 1994–2000.

Ten silver and red lines meeting on a back rectangle, team name above and below it.

In 1994, the Kings radically changed their look, adopting a new color scheme of purple, silver, black and white.

The uniform set consists of one wide side stripe running through the right leg of the shorts, with the primary Kings logo prominently featured. The home uniform is in white, while the road uniform is in black (by later coincidence, the NHL's Los Angeles Kings would use that exact color scheme). From 1994 to 1997, a half-purple, half-black uniform, featuring checkerboard side panels, was used as an alternate uniform, which was panned by fans. However, the uniform was revived for the 2012–13 season during Hardwood Classics Nights. A new purple uniform, which shares the same template from the home and road uniforms, was introduced in the 1997–98 season.

Before the start of the 2002–03 NBA season, the Kings changed their uniforms once again. This set included a modernized version of the "Kings" script on the home jersey, and the city name on the purple road jersey. The side st

Since becoming the San Antonio Spurs in 1973, the team colors have been black, silver and white. The distinctive logo of the word Spurs in Eurostile font, with the stylized spur substituting for the letter U, has been a part of the team's identity since their move to San Antonio.

The logo incorporated 'Fiesta colors' of pink, orange and teal, used from 1989 to 2002 (though the uniforms remained the same), and alignment from straight to arched beginning with the 2002–03 NBA season.

The Spurs have always worn black on the road and white at home, except during the 1973–76 ABA seasons and their first NBA season when the home uniform was always silver. Until the 1988–89 NBA season, the road uniform had "San Antonio" on the front while the home uniform featured the team nickname adopted from the Spurs logo; from 1973 to 1982, the road uniform lettering was black with silver trim. In addition, from 1977–81 a saddle-like striping was featured on the back of the home shorts. Since the 1989–90

A silver basketball with claw marks, team name around it in white on black. Circle outlined in red.

Since the team's move from New Orleans to Salt Lake City in 1979, the Utah Jazz have worn several uniforms throughout their franchise history. From 1979 to 1996, the Jazz' home uniforms consisted of the logo (the word "Jazz" with the J represented as a musical note combined with a basketball) on the center chest, with purple numbers. The only modification to this uniform was the word "Utah" being added to the center chest logo before the 1986–87 season.

Have a discussion about the National Basketball Association Logos group with the community:

Use the citation below to add this symbols group page to your bibliography: